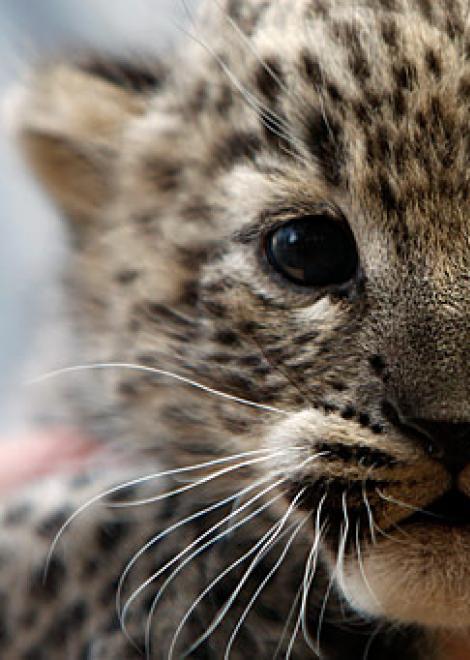 On average, the Asian Leopard cat is as large as a domestic cat, but there are considerable regional differences.

In Indonesia, the average body size is 18 inches and the tail is another 8 inches; whereas, in the Amur region it reaches a body size of 24 inches with a 16 inch tail. Its shoulder height is 16 inches and it weighs 10-15 lbs, similar to a domestic cat. The fur is also quite variable; it is yellow in the southern populations, and silvery-grey in the northern regions. The chest and the lower part of the head are white. The Asian Leopard cat bears black markings, either spots or rosettes, depending upon the subspecies. The Asian Leopard cat is usually a solitary animal except during the mating season and in captivity if handled by humans. It has litters of 2 to 4 cubs.

Did you know that the male Asian Leopard cat rears his cubs along with the mother. There aren't many male animals that will rear their own young.

Did you know that If you leave any water down low the Leopard cat will use it as a toilet! This is a natural instinct that the wild Leopard cat does in running waters or rivers to mask its smell from predators.

Asian Leopard cats are nocturnal and generally hunt at night and alone. They hunt both on the ground and in the trees. Their diet includes rodents, small birds, amphibians, fish, insects, reptiles, eggs and small mammals including small deer. Occasionally they also feed on fallen bats and swifts near caves.

An adaptive and skilled predator, the Asian Leopard Cat is a nocturnal hunter, and is arboreal as much as terrestrial, it can climb trees and has been observed at 4 meters hunting rodents ; it can also swim. These animals also make palm oil plantations their hunting ground where they prey on the abundant rats. A Korean study suggests rodents make up 90% of the diet ; though they also catch insects, birds,small mammals, small reptiles, amphibians, and even aquatic prey such as fish.

Asian Leopard cats are a small domestic sized wild feline found living throughout Asia, Russia, Japan and Indonesia. Their coat pattern is arrow-headed, rosetted, spotted and in some cases, two or three combinations of the above. Their colour varies from grey to golden-yellow or honey. Their arrow-head, rosettes or spots are brown to black. The background of the Leopard cat's coat will also vary from very light to very dark. Asian Leopard cats live in mountains, forests, grassland regions, in logs and trees. They are also known to live near water and quite enjoy it.

As the name suggests, the Asian Leopard Cat is a small feline that originates from, and lives exclusively in Asia ; inhabiting the East and South East of the continent from Indonesia to Korea and far East Russia ; through Pakistan and into Eastern Afghanistan. It has a very varied range of habitats, from scrubland and semi-deserted areas ; dense tropical forest ; coniferous and pine forest ; river valleys and coastal areas ; and even agricultural areas, and can even inhabit areas of up to 3000 meters. Though these animals generally avoid humans, they can live on the outskirts of villages.

A subspecies of this feline called the Iriomote Cat lives exclusively on Iriomote Island, making this tiny subspecies comprising of less than 100 individuals the only wild felid to inhabit Japan.

Due to it's large distribution, this feline is not considered to be particularly threatened, as it is placed as Least Concern on the IUCN Red list, although it is still vulnerable to habitat loss and hunting in parts of it's range such as China, where 150,000 cats are killed annually for the fur trade.

A solitary hunter with the exception of the breeding season and raising young, Asian Leopard Cats, like other felines, have defined territories which they maintain through scent marking. Males generally have larger territories than females, (3.5 km² and 2.1 km² respectively) and often overlap the territories of one or more females.

The breeding season depends on the location ; cats in the Southern part of the range breed all year round, while cats in the Northern range give birth to young during May. The gestation period is 65 – 70 days, as a female gives birth to one to four kittens, opening their eyes at 5 – 15 days and reaching sexual maturity at 8 – 12 months ; and individuals can live for over 15 years in captivity.

Considering the fact the Asian Leopard Cat inhabits such a large geological location and wide range of habitats, it is not surprising that this species has 12 subspecies, varying in size, appearance, and colouration. The average size is similar to the domestic cat, though the smallest specimens are found in the Philippines, while the largest are found in the Northern part of their range.

The colouration varies from fawn, light yellow, ocre, silver-grey ; all the way to a darker grey-brown colour ; and the fur of the Northern populations is denser than their Southern cousins to account for colder temperatures.